skip to main | skip to sidebar

I admit it has been some years since I last posted, so I felt it was time to once again take up blogging. I welcome those who would like to keep up with my blogs. Since I last posted, Gospel Advocate published my book, A Faith Built on Sand.

The Search ministry is now booming. It truly goes into every corner of America to all 210 television markets in America. It appears in them all by INSP (the Inspiration Network) and in 170 markets on 200 broadcast stations. In addition SEARCH appears on 150 cable systems, 50 radio stations, and in 45 other countries outside the USA. SEARCH fills about 6,000 requests for information per program. We are receiving many, many contacts from outside the Bible Belt. We are so grateful and humbled by what God is doing. You can see more than two years of programming on the website or download about 200 audio files of singing by the Edmond Church of Christ. I have been quite busy in recent weeks in Gospel Meetings, preaching in several states. This summer Jackie and I will go to Hawaii to the Honolulu Church of Christ and visit the Lord's church on Christmas Island. Since we have been so busy, we have needed your prayers. God bless, Phil
Posted by Phil Sanders at 3:03 PM No comments:

http://searchtelevision.blogspot.com/
Posted by Phil Sanders at 10:57 AM 2 comments:

In coming days, I'll be posting my material to a blog associated with "In Search of the Lord's Way." We'll be giving news, Biblical articles, and useful information at that blog.

Let me encourage you in the coming days to check out that blog.
Also there are daily devotionals at www.searchtv.org.
Posted by Phil Sanders at 4:35 PM No comments:

Through the efforts of brethren in New Philadelphia, Ohio, we are able to appear on a new cable system (PCM, Channel 2) each Sunday morning at 7:30! Thanks to Tim Hatfield and the New Philadelphia Church of Christ!

The Lord be with you,
phil
Posted by Phil Sanders at 3:34 PM No comments:

What is the gospel? To hear some speak, the gospel is merely the facts. They say that 1 Corinthians 15 makes it clear that the gospel is compromised of the facts of the death, burial, and resurrection of Jesus Christ.
Well, let's see.

1 Corinthians 15:1-5 ( NASB ) 1Now I make known to you, brethren, the gospel which I preached to you, which also you received, in which also you stand, 2by which also you are saved, if you hold fast the word which I preached to you, unless you believed in vain. 3For I delivered to you as of first importance what I also received, that Christ died for our sins according to the Scriptures, 4and that He was buried, and that He was raised on the third day according to the Scriptures, 5and that He appeared to Cephas, then to the twelve.

Second, the message of the apostles was persuasive.
They taught with an end in mind. They wanted their listeners to hear and heed what they heard.

Knowing the fear of the Lord, they persuaded (2 Cor. 5:11).
And working together with Him, we also urge you not to receive the grace of God in vain—(2 Cor. 6:1)
Acts 18:4 ( NASB ) And he was reasoning in the synagogue every Sabbath and trying to persuade Jews and Greeks.
2 Tim. 2:24-26 The Lord’s bond-servant must not be quarrelsome, but be kind to all, able to teach, patient when wronged, with gentleness correcting those who are in opposition, if perhaps God may grant them repentance leading to the knowledge of the truth, and they may come to their senses and escape from the snare of the devil, having been held captive by him to do his will.

The power of the Gospel worked when people believed the message about the facts and heeded that message. The gospel is God's power to save (Rom. 1:16; 1 Cor. 1:21).

Let's not commit the fallacy of confusing the points of the message with the purpose of the message. The good news is a message of salvation to the one who hears and obeys. 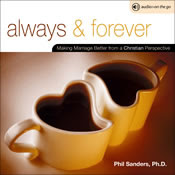 I will be at Highland Church of Christ in Columbia, TN, on May 3 to do a marriage enrichment seminar.

Our Theme:
“ALWAYS AND FOREVER”
Most married couples seem to put everyone and everything else before their most important relationship—their own. In Always and Forever, Phil Sanders focuses on critical issues that will help your marriage last a lifetime. You’ll learn the importance of these six keys to a satisfying relationship:

I'm really excited about coming to Columbia May 3! Jackie and I will celebrate our 35th wedding anniversary on May 17!

Friday PM: Why is Our World Turned Upside Down?
Saturday PM: Will Jesus Really Help Me?
Sunday AM Bible Class: The Greatest Needs of Our Time
(Faith Hope and Love)
Sunday AM Worship: Why You Should Be a Christian
Sunday PM Worship: Living with Faith in an Unbelieving World (Postmodernism)

Come if you can.
I will be at Lads to Leaders Convention April 10-11 and in Elizabethtown, KY for a gospel meeting April 12-15.
Posted by Phil Sanders at 10:50 PM 3 comments:

Phil on In Search of the Lord's Way 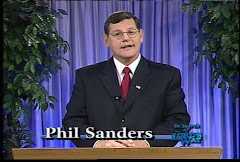 Phil Sanders
Edmond, Oklahoma, United States
In Search of the Lord's Way, a ministry of Edmond Church of Christ. Minister, teacher, and friend

Jackie and me in the garden tomb 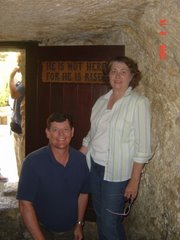